The Essence of an Alchemist

Home » The Essence of an Alchemist 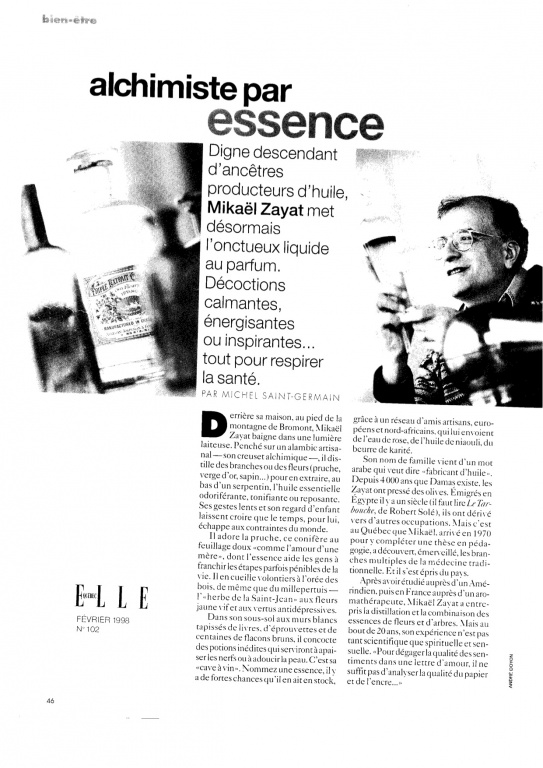 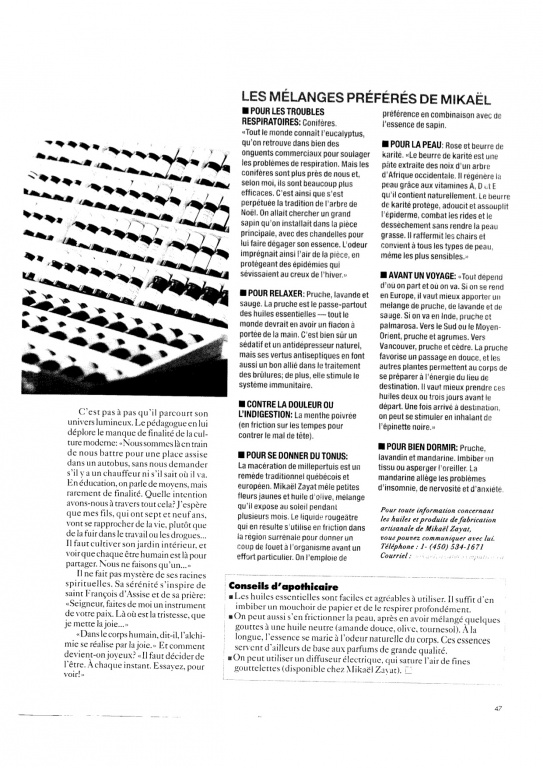 The Essence of an Alchemist

Translated from the text “Alchimiste par essence,” by Michel Saint-Germain, Elle-Québec, February 1998, no102

Behind his home, at the foot of Bromont’s mountain, Mikaël Zayat bathes in milky light. Bent over his artisan’s still—his crucible—he distils branches or flowers (spruce, goldenrod, fir…) extracting a fragrant, toning, or relaxing essential oil. With childlike manners and slow movements, it seems as though, for him, time escapes worldly constraints.

He adores spruce, a conifer whose foliage, is as gentle to the touch as “a mother’s love,” its essence helps people to overcome the difficult stages in life. He readily collects it along the forest’s edge, just like St-John’s wort with its brilliant yellow flowers and antidepressant virtues.

In his basement, its white walls bedecked with books, test-tubes, and hundreds of brown bottles, he concocts mysterious potions for use in calming nerves and softening skin. We are in his “wine cellar.” Name an essence and chances are he has it in stock thanks to a network of European and North-African artisan friends who mail him rose water, paperbark tree oil, or shea butter.

His family name comes from an Arabic word which means “oil manufacturer.” Over the 4000 years of Damascus’ existence, Zayats pressed olives. Emigrated to Egypt a century ago, they scattered toward other occupations. But it was in Quebec, after Mikaël arrived in 1970 to complete a thesis in education, that he discovered, with great wonder, the many branches of traditional medicine. And he fell in love with the country.

After studying with a Native American, and later with an aromatherapist in France, Mikaël Zayat began distilling and combining flower and tree essences. But after 20 years, his experience is not so much scientific as it is spiritual and sensual. “To understand the depth of feeling in a love letter, it is not enough to simply analyse the quality of the ink and paper…”

Step by step, he travels his luminous universe. The teacher in him deplores modern cultures’ lack of ambition, “There we are, fighting to get a seat on the bus, but we forget to ask if there is a driver or if he knows where he is going. In education, we speak of methods, but rarely of motive. What is our intention through all of this? I hope that my sons, who are seven and nine years old, will move closer toward life, rather than escaping it through work or drugs…One must cultivate one’s inner garden, and see that every human is here to share. We are but one…”

He does not make a mystery out of his spiritual roots. His serenity is inspired by St Francis of Assisi and by his prayer, “Lord, make me an instrument of your peace.
Where there is sadness, let me sow joy…”
“In the human body,” says he, “The alchemist fulfills himself through joy.” And how does one become joyful? “One must decide to be joyful. In every instant. Try it!”

ZAYAT AROMA is a family enterprise committed to offering the best in Holistic Aromatherapy since 1985. We are specialized in the distillation and distribution of essential oils and other aromatic products 100% pure and natural. ZAYAT literally means to “The One who Makes the Oil”.

Essential oils and other organic products certified by Ecocert Canada